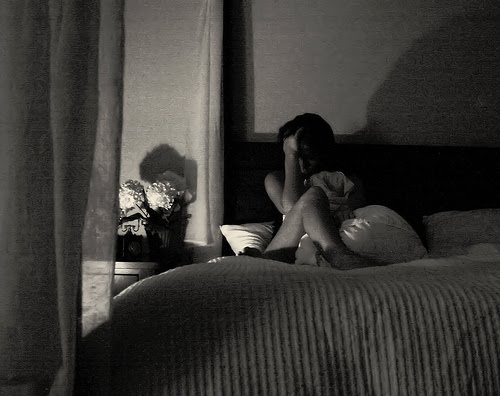 Seeing him again after all these months remind me of the countless nights I would wake up in the stifling darkness of the bedroom, hyperventilating, with a deep, desperate urge to fill my emotional hollowness, to purge the toxins that were lining the walls of that emptiness. I would start up, carefully turn the door knob and walk to the living room, sit on the dark brown leather sofa in the middle of the expanse of the room and look into space. After a while, I would slowly break out in desperate sobs, trying to catch each breath and trying to stay as quiet as possible so that I don’t wake him. Because surely, he would say I was bringing depression upon myself, that I was incapable of being happy, that I was somehow at fault for not being able to sleep at night.

At times, my chest would tighten so badly that I felt a need to talk to someone. I would then go through a rolodex of people in my head, wondering who I could talk to at 1 a.m. I usually end up calling my friend, T, in Beijing because I was always there for her when she was facing her relationship problems with an errant boyfriend. Even in my mind, in moments of desperation, I understood that friendship was based on a reciprocal principle, that you can only trouble those people who have troubled you or people who could possibly understand that aspect of you that you don’t show to others. Because, most friends have their own lives and very likely their own husbands or boyfriends, who become the most important elements once you get older. And friends and their relationship problems are best referred to therapists who are professionals that can properly sort out those prickly compatibility issues with tried and true methods. And you don’t want to exhaust your friendship points by troubling your friends excessively, because then, you’ll just be the friend who’s “always like this, or always like that”.

Yes, as you get older, you find that the kind of friendship you had when you were a kid is in real short supply. But I don’t want to whine about how my friends are never there for me or there’s never anyone to call, because it’s not like I’m anyone’s sanctuary. I’ve tried being a good friend, but it seems as people get older, people don’t just expect you to be a good friend, people expect you to be a model friend who fits their opinions and their way of life. So, perhaps it’s my own undoing that I never could fit in with mainstream society. That’s why in the middle of the night, in between gasps and sobs, I was always alone with no one to call.

He would probably agree it was my own undoing and my friend, who prides herself on being a “good wife”, would probably also agree that you should not expect your husband to help fulfill your dreams or even to talk. Talking, she says, are between girlfriends, not between husband and wife. Something about that always seems strange to me, though. If you were supposed to live your entire life with this one person and somehow this one person becomes the most important thing in your life, so much so that friends become secondary to that one person, why is it that you shouldn’t expect him to also be your confidante in times of need? Then, who should you talk to? A really cynical person might say you should just talk to a shrink. But I could never accept that, because if you were not confidantes, what were you?

Leaving aside love for now, since every time you bring up the issue of love to a married person, people seem to think it’s immature and irrational to expect a married couple to be still in love like they were when they first met. So, what purposes do a married couple serve? Sex, companionship, friendship, children. Anyone wants to chip in? What else does a married couple serve? Societal need maybe? In my marriage, there was no sex. No friendship. No children. Companionship was in the way of just sharing each other’s space. So, it left me wondering why I was in this marriage at all — if I were with someone whom I can’t talk to, I don’t have sex with, I have no kids with and who doesn’t want to do anything with me besides eat and watch TV. And when we do eventually “talk” about “my needs”, it’s through a desperate plea to communicate at the end of which, the conclusion is always that there’s nothing wrong with us, that it’s my fault for not being able to assimilate into and accept boring married life. In fact, his favourite throwback phrase was “What do you think other married couples do?”, like it was a mantra for me to accept that this was how our marriage is going to be for the rest of our lives and there was nothing he or I could do to change it. Sexless. Loveless. Friendless. Desperate. Lonely. Bored.

But somehow, the hopeless romantic in me refused to believe that this is all there is to life and love. Maybe that’s my curse, the fact that I couldn’t bring myself to believe that the eventual fate for all lovers was a life of married strangers, that marriage is an inevitable deathbed of love, that somehow, this was my fate.